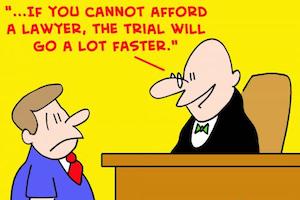 Remember Billy from Part 1? He was charged with misdemeanor marijuana possession two years ago. It was his first offense and he did not hire an attorney. He plead guilty under Georgia's conditional discharge drug first offender law when he might have been able to take advantage of, and participate in, a pretrial diversion program. He was recently arrested again for the same offense and won't be able to take advantage of either one. Billy's situation illustrates the importance of people facing criminal charges to hire or consult with an attorney, especially first time offenders.

Now meet Brenda. Brenda was pulled over in Cobb County and received a ticket for driving with an expired tag and she was given a date to appear in court. Before she was able to renew her tag, she was pulled over again in Dekalb County and received the same citation. Brenda's Dekalb Recorders Court date was prior to her required appearance in Cobb County, so she appeared in Dekalb Recorders Court and disposed of her case. Brenda made a critical error, however. Without speaking to a lawyer, she thought that since she renewed her tag and her case was closed in dekalb that she did not have to go to court in Cobb. She was very wrong.

Her failure to appear resulted in her driver's license being suspended. Generally, if a person does not receive a formal notice of a suspended license, that is a defense to the charge. But a few years ago the State began printing this penalty for failing to appear in court on citations, and this is considered proper notice. While driving in Dekalb County, she was stopped again, arrested and taken to jail for driving on the suspended license. After bonding out of the Dekalb County Jail, she went to Cobb County and paid her fine. This removed the FTA and the clerk gave her a release letter which allowed her to reinstate her license. After this she appeared in Dekalb County Recorders Court again and was allowed to plead Nolo Contendre to the suspended license ticket. This was important because a conviction for driving on a suspended license results in a license being suspended for an additional six months. Nolo Contendre translates into "no contest." It means you are not pleading guilty, and you are not pleading "not guilty." You are simply not contesting or fighting the charge and are accepting responsibility for the offense and associated penalties. But the benefit of a Nolo Contendre plea is that it prevents a license suspension. A person can only plead Nolo Contendre once in a five year period.

Here is where her case became interesting. The Dekalb Recorders Court clerk made a mistake by not providing the Department of Drivers Services with her Nolo plea. The Department of Drivers Services then made a mistake by suspending her driver's license again. We were able to quickly communicate all of this to the DDS and re-validate Brenda's license. But the point is, all of this could have been avoided if she had just simply called me when she was first pulled for the first time in Cobb County.