Home
Articles
Arrested at the Airport? Check Your bag!

Arrested at the Airport? Check Your bag! 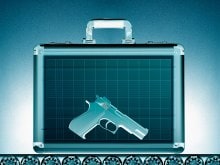 The terror attacks of 9/11/2001 resulted in a new era of restrictions and laws concerning airport security. The Transportation Security Administration (TSA) continues to develop new and increasingly invasive technologies and procedures to stop people from sneaking dangerous devises onto planes.

Lately, USA Today reported that according to the TSA more than 1500 guns were discovered at airport checkpoints throughout the United States in 2012. In 2011, more than 1300, many of them loaded. Through the end of November 2012, Atlanta's Hartsfield-Jackson International Airport confiscated 80 handguns, the most of any other airport. USA Today quoted David Castelveter, spokesman for the TSA, acknowledging that people who probably "didn't know they couldn't carry them or were not aware they were in the bag" bring the majority of weapons that come through airports.

But ignorance of the law is no defense. If you want to take a gun with you on a commercial plane, certain protocols must be followed to keep from being arrested for illegally possessing the gun or some other criminal act. To air travel with a gun it must be unloaded and locked in a case in your checked baggage. When you check your bag, you must tell the airline about the weapon. You cannot carry a firearm through the security checkpoint. There are similar procedures for other types of weapons.

If you are not law enforcement or military without the proper authorization to carry a firearm on a plane, if you attempt to do so, you could face a felony charge in Georgia and a conviction which carries a potential sentence of one to ten years.

Very recently, Andre Smith, tackle for the Cincinnati Bengals, discovered the harsh reality of these requirements here at Hartsfield-Jackson International Airport. He was arrested on January 17, 2013, carrying a loaded .38 caliber handgun in his carry-on bag. It is very likely that he simply forgot it was in his carry-on bag, or he forgot to put it in his checked baggage. But this mistake resulted in a charge of carrying a weapon in an unauthorized location, being taken to the Clayton County Jail, and having to post a $3,000 bond. This was the third gun found at Hartsfield-Jackson International Airport already in 2013.

Possessing weapons isn't the only reason people get arrested at airports. Again, since the attacks of September 11, 2001, airports across the country tightened security in every area to assure travelers' safety, adding more officers, both overt and undercover, and advanced technological surveillance. This increased vigilance makes it easier to get arrested for other types of crimes like theft, assault and battery, possession of drugs and many others. Heightened security at checkpoints often causes tempers to flare, often resulting in charges of disorderly conduct or worse.

Avoid arrest at the airport by properly preparing before you arrive. Check your bags thoroughly if you are traveling with any type of weapon, especially firearms. Make sure they are unloaded, strongly sealed, and stowed securely in your luggage. If you are arrested at the airport, however, call us immediately to protect your rights and take care of your case.