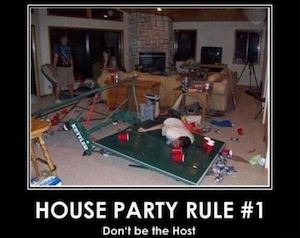 Around the country, local governments are finding ways to confront and tackle the problem of underage drug and alcohol use. It is against the law for everyone to possess and ingest illegal drugs; and of course is already against the law for people under the age of 21 to drink. But over the last two years local governments have been trending towards extending the liability of underage drinking to children's parents and/or guardians.

Referred to generally as "party ordinances" or "host ordinances," these laws are designed to impose criminal penalties against the parents or guardians, or owners, or occupiers of residences where alcohol is knowingly supplied and furnished, and children are allowed to drink it. Two Cobb County cities have jumped on this bandwagon, The City of Austell and The City of Kennesaw. Now, when City of Austell and Kennesaw police officers crash a party, they will arrest all minors for being in possession or consuming alcohol, and they will also charge the people chaperoning the party.

Minors who are arrested for the first time might be entitled to participate in a pre-trial intervention or diversion program. If so, they will generally be required to perform such tasks as community service, get drug and alcohol evaluations, provide clean urine drug and alcohol tests, write statements admitting what happened and what they have learned from the experience, and sometimes to write a statement implicating who hosted the party and supplied them with the alcohol. These programs are important, however, because competing one of these types of programs results in a dismissal of the case and eligibility to have criminal records cleaned. Minors who do not qualify for a diversion program face a host of harsh and unforgiving consequences ranging from probation, fines, community service, and suspension of their driver's license if they have one.

Georgia law does allow alcohol to be furnished to those under the age of 21 in certain narrow circumstances:

People furnishing alcohol to minors in any other circumstance, however, face fines and up to 6 months in jail.

Ordinances like these are popping up all over the country. Cities in twenty-four other states have passed similar laws and more cities in more counties in Georgia are sure to follow. Certainly, no one intends for the police to be called out to a party. But more often than not, neighbors will call 911 if the music is too loud or someone's behavior gets out of hand.

If you find yourself or know someone in this situation, or your child has been arrested for underage possession or consumption of alcohol, you should not wait until the last minute to consult with a lawyer. Call me now at 404-561-0411. I'm always available to discuss your options and the best way I can help you.