Home
Articles
Domestic Violence – Ya Gotta Play Nice With Others

Domestic Violence – Ya Gotta Play Nice With Others 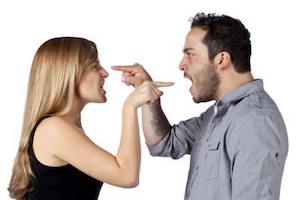 Ever get into a spat with your spouse? Have you and your girlfriend or boyfriend, brother or sister, son, daughter, or parent been so angry at each other that one or both of you do something you immediately regret? Has it ever resulted in someone calling the police? If so, I'll bet you never thought somebody would actually be arrested and hauled off to jail, did you? You just wanted the police to come and calm things down, cool things off, right? Then you found out the hard way that that is not a police officer's job, and they are not your friends, didn't you? "BUT I DON'T WANNA PRESS CHARGES," you scream, only to find out that that's just "TV talk." Well, you're not alone. It happens every single day.

Georgia considers domestic violence to be any acts of unwarranted aggression between married or formerly married couples, boyfriends and girlfriends (if they live together, or if they don't live together but have children together – baby-mamas and baby-daddys), parents and children (including step or foster parents and step or foster children), and siblings; really, pretty much anyone in a domestic relationship.

You know how easy it is to get charged with battery? People get bruised; people get cut; people get scratched; people get bumped, shoved, grabbed, tripped, trapped, slapped, slammed, jammed, jabbed, punched, pushed, poked, and even spit on. Every single one of these is a battery. And if it happens between the people I just mentioned, it's domestic violence battery. You know how easy it is to be charged with assault? All it takes is putting someone in fear of a battery. The difference between a simple assault and battery (misdemeanors) and aggravated assault and battery (felonies) is the severity of the injury that was threatened or actually inflicted.

But assault and battery aren't the only crimes that can constitute or get someone arrested for domestic violence. Other examples are stalking, criminal trespass, damage to property, and false imprisonment. Additionally, if a child under the age of 16 is present or involved, a person accused of these acts will almost certainly face a charge of cruelty to children in the first, second, or third degree.

So there you were, watching the police take your loved one to jail, right? Maybe you were the one arrested; or perhaps you both were. What happens now? After being booked into jail, you'll have court within 72 hours for a judge to determine bond.

If this is the first time you've ever been exposed to this side of life outside of "Law and Order," you're understandably very scared at this point. The shock of the whole experience doesn't diminish in some of my first offender clients for weeks. Once bond is posted, however, life can start to get relatively back to normal. Oftentimes we have to deal with "no contact" conditions on the bond. This means that the person who was arrested can have absolutely no contact, in any form, with the alleged victim. These conditions can be modified, but only by a judge. After this, time is spent investigating your best options. For first offenders, pretrial diversions programs might be the best course. For others, gearing up to mount a defense may be the best action, or seeking an agreed upon resolution with the prosecuting attorney.

The consequences of a domestic violence conviction can be severe. Subsequent domestic violence incidents are treated as felonies; you're restricted from owning a firearm; and it can certainly affect divorce and child custody proceedings.

It's very important that you seek help if this happens to you or someone you love. You certainly don't want to go through this alone. If you're reading this, and know someone in trouble, call me right now. 678-561-0411. Let's talk about how I can help you.