Home
Articles
Take out a Warrant? It Ain't That Hard

Take out a Warrant? It Ain't That Hard 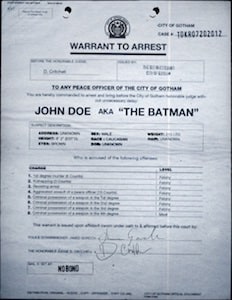 You might be surprised to learn how easy it is for one person to have a warrant taken out for another person's arrest. It happens all the time in theft cases; or in fraud cases, if someone passes a bad check; or in assault and battery, and domestic violence cases where police either were not called, or were called but did not discover enough evidence to make an arrest.

The procedure is relatively easy. If a person wants to take out a warrant for your arrest, all they have to do is go to the magistrate court of the county where the alleged wrongdoing took place and fill out a warrant application. The applicant provides as much information as they want to describe why they want a warrant against you. Once the application is filed, the court will send out a notice for you to appear in court before the magistrate judge. Here the applicant will have the opportunity to present whatever evidence they have to support their allegation, and you have the opportunity to defend yourself in an effort to prevent the judge from issuing the warrant.

But how much evidence do they need against you? Not much. The standard of proof is "probable cause." The judge must decide whether or not probable cause exists for a warrant to issue. It is not a high standard. In other words, if the judge simply decides that you probably did what the applicant is accusing you of doing, he/she will issue a warrant for whatever charge he/she feels is appropriate from the alleged facts. You will be taken into custody and have to post a bond to get out.

You have a right to a lawyer at these hearings, and it is always advisable to have one because the less you say the better. If the judge does issue a warrant against you, whatever you said during the hearing can later be used against you by prosecutors when your case starts to work its way through the criminal process.

An interesting thing to note about these hearings is that they can often be a double-edged sword for the applicant. There are two sides to every story. Not only do you have the right to bring a lawyer, you also have the right to bring witnesses on your behalf. If you present evidence, even though you don't have to, that suggests the applicant might also be guilty of wrongdoing, some judges will issue warrants against them, or perhaps even both of you.

If you have received a notice to appear in magistrate court because someone has filed a warrant application against you, the best advice is to contact a lawyer with experience in defending clients at these types of hearings. It would be very easy for you to be taken advantage of without knowing the court procedures. Call me, and we will discuss the circumstances which led to the application being filed, what your options are, and what can be done to possibly avoid the warrant.